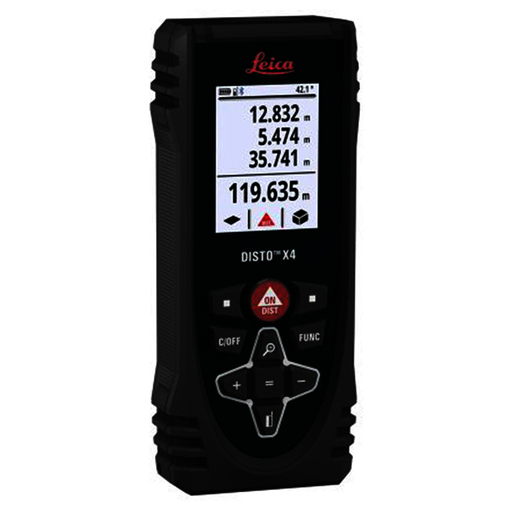 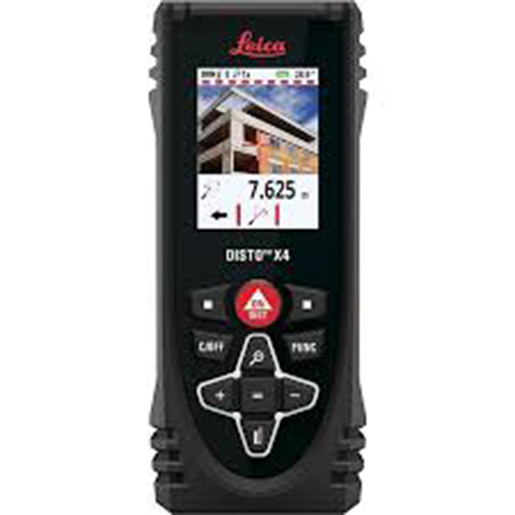 **Please note that this is an estimate.
Sorry, we are not able to calculate a shipping estimate for this product. Please contact CSDS on Live Chat or at 1-916-344-0232.

Our Livechat team is currently unavailable. Please use the “Contact Us” option under “Support” or try again during our hours of Livechat operation:
8:00 AM to 6:00 PM EST

A DISTO designed for bright, outdoor environments.
Measuring outside often? The DISTO X4 improves on the X3 by adding a pointfinder camera, which lets you aim your DISTO’s laser point using the full color, high-resolution display—simply line up your desired measurement point in the on-display crosshairs and you’ll get a precise measurement.

Just as smart and just as comfortable to use.
Auto-rotating display. On-board tilt sensor for Smart Horizontal. Includes Bluetooth® for transferring measurements to your computer or mobile device. And it works seamlessly with our DISTO Plan App.

The X4 is meant for the outdoors.
The X4 also offers the same rugged construction as the X3 and e7400x: IP65 and 2-meter drop tested. Able to measure at 500’ (150m) with the pointfinder camera, you have plenty of range with certified accuracy in any kind of lighting.

Also compatible with the DST 360.
The DST 360 is a smart tripod and adapter set that extends the measurement possibilities of your X4. With the DST 360, your X4 turns into a professional measurement station—you can take point to point (P2P) measurements from one location.

Capable of Point-to-Point (P2P) measurement technology.
When used with the DST 360, the X4 can combine rotation, angle, and distance data to produce highly accurate Point-to Point (P2P) measurements, which allows you to accurately measure distances between any two points from a third position.

Mobile device connectivity for the DISTO Plan App.
Use the DISTO Plan App to access Sketch, Document, and Smart Room features to create detailed CAD-ready floor and wall plans, including doors and windows. Export your plans as .DXF or .DWG files.